DINAMICS presentation at the Pharma Test Expo
Our drinking water will be safe from potential terrorist attacks thanks to four years of collaborative efforts by European scientists from eight countries working on the DINAMICS research project, visitors to the inaugural Pharma Test Expo 2011 in Cologne, Germany, learned on February 10.

The European Commission responded by co-funding the development of a new water quality warning system to help prevent bioterrorist attacks through its detection of dangerous infectious agents, such as bacteria and viruses.

Scientists representing seven of the 12 leading-edge technology companies and public research institutes involved in the over 7 million-euro DINAMICS project reported on the innovations made since the research began in 2007 at a workshop at the Pharma Test Expo 2011 sponsored by Provenion Engineering, a partner in the DINAMICS project and an exhibitor at the Expo. 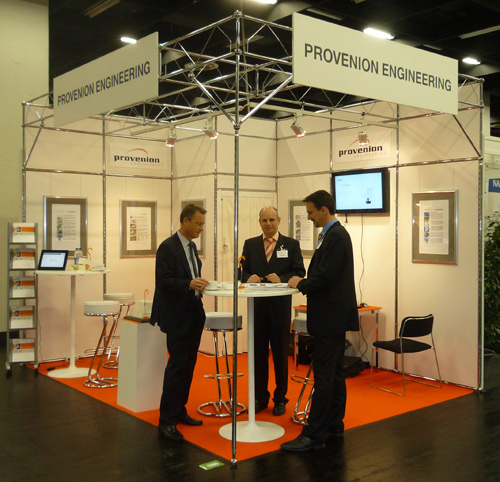 Provenion Engineering Stand at the Pharma Test Expo
“The aim of the project is to develop an online monitoring system for detecting the presence of pathogens in drinking water,” said Dr. Sabine Müller, project manager at the German technology transfer center Steinbeis-Europa-Zentrum, which is currently in charge of financial and administrative management of the project as well as knowledge management and dissemination.

The DINAMICS consortium brought together experts in the fields of:

The team produced what Dr Müller called a “lab-on-a-chip platform” to quickly detect pathogens in water. Their prototypes, which should be on the market in several years as both handheld and stationary instruments, include a “cost-effective DNA sensor,” that is combined to microfluidic components and electrical and electronic circuits. 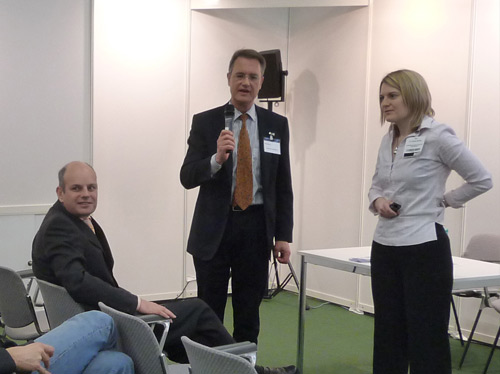 Presentation by Dr. Sabine Müller, Steinbeis-Europa-Zentrum
“These devices are next generation diagnostic tools for our water supply,” said Rolf Boetzel, Sales Manager at Provenion Engineering, the German company that engineered the prototype devices by integrating the various components of the project.

The beauty of the innovation is that it has possible applications in medical diagnostics, the food industry and in pharmaceutical testing, Boetzel added.

To view the DINAMICS workshop presented at the Pharma Test Expo 2011, click here.


You may also want to view the DINAMICS dedicated website:
http://www.dinamics-project.eu/

Add comment
Load more...
Older Post Home
Subscribe to: Post Comments (Atom)
HuLST Expo is the umbrella title to five major life science manufacturing test fairs. It is the world’s only exclusively focussed event for this hugely important part of the manufacturing process, covering test and product evaluation from early stage R&D pre-production test up to certification and approval, and then into all aspects of in-line quality assurance test and inspection.